Guide to Summer Skiing in Europe 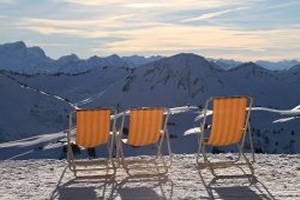 For those European skiers and snowboarders who are genuinely obsessed with their favourite sport, the very thought of a summer holiday spent sat on a beach is enough to bring them out in a cold sweat. No sooner have the majority of Europe's resorts shut down in April than they're looking at the continent's most northerly resorts, the glaciers or even a trip across the globe in search of snow in the southern hemisphere. The less adventurous, but much cheaper, option is to hit the indoor slopes or the dry slopes - a cheap way of getting in some summer skiing as the rest of the country is concentrating on the search for summer sunshine and a golden tan, rather than an empty piste. However, nothing beats a sneaky unexpected days skiing. I've been on summer hiking holidays in Zell am See in Austria and near Zermatt in Switzerland and managed to squeeze in a days skiing at Kaprun and Zermatt. There's nothing to compare with that idea that you're beating nature by skiing in the snow when everything else suggests you should be sat by a pool.

For those of us living in Europe, skiing in the summer months involves one of four options: Glacier skiing, Arctic resorts, hitting the indoor and artificial slopes or the most drastic - a trip to the Southern Hemipshere.

Click on any of the links above to go to the relevant section. Or just read on....

We also have a large section describing all of the European resorts offering summer skiing.

When it comes to summer skiing the one thing that Europe is blessed with in comparison to other areas is resorts with access to glaciers - North America, for all it's vastness, has only two resorts that offers summer glacier skiing - Whistler and Timberline, whilst Europe has a whole host of them, the largest of which are Les Deux Alpes, Tignes, Solden and Zermatt. There are plenty of other smaller ones that open, although many no longer open in the height of summer due to an increases in temperatures and a reduction in the guaranteed skiing area they can provide.

However, anyone thinking that summer skiing in Europe's highest resorts is going to resemble their annual winter pilgrimage to the Alps should think again and probably skip this section ! Remember - we're talking about glaciers here, high above the tree line, so if you're expecting to be cruising down long, picturesque, tree-lined trails then forget about it and wait to get your fix in December.

Glacier skiing can be fantastic - the slopes can be nice and quiet, you're often bathed in warm sunshine, you can head back down into the valley for an afternoon of other activities, but there are a couple of issues that you'll need to acquaint yourself with... the altitude itself and the variety of skiing on offer.

The first problem with the high altitude is actually getting up there - it can take up to 40 minutes, even with high speed lifts, to get up into some summer ski areas from the resort centre down in the valley. And when you get up there the thin air, combined with the physical actions you'll be undertaking, can be dangerous to some people, especially if you travel up too quickly and don't allow time to acclimatise.

The variety of skiing on offer in some of the glacial areas can be limited, hardly surprising given the dramatic reductions in size that some of them have suffered over the last 30 years. So rather than having access to a network of slopes that twist here there and everywhere, as you do in winter, glacier skiing is more about making the most of a large, wide, obstacle-free area, the majority of which has gradients often more suited to intermediates and beginners.

If you've no problem with the altitude and just fancy sharpening up your technique or just having a bit of fun then don't be put off - summer skiing definitely has its own special charm and, despite the lack of trees, the scenery can be awe-inspiring. You might even bump into some professional ski racers, many of the national teams use the glacial areas to practice for the forthcoming season and to test out new equipment. So don't be too surprised if you find yourself sharing a lift up the slopes with an Olympic medallist ! Because summer skiing appeals primarily to those completely dedicated and addicted to the sport, the standard of those participating from June to August tends to be very high. Complete beginners tend to wait until winter to learn, whilst the average intermediate skier would rather be on a beach somewhere hot. But don't let that put you off, if you fancy getting some practise in on real snow then go for it - if the French national ski team has a problem with you getting in their way then... tough !

The summer areas have also becoming increasingly popular with snowboarders, as lots of half pipes and snowboard parks have been developed at these areas, they can hardly be marketed seriously without one to be honest.

So what are the conditions like ? Well, just like any other time of the year in the mountains, nothing is ever certain. However, there is obviously more chance that the weather will be glorious just because we're talking about it being summer. This does lead to it's own problems - snow blindness is just that - blindness ! Dont even consider going up into these areas without decent sunglasses or goggles, you cant expect to be staring into vast ice-white bowls without it having any effect. And just because the temperature at these altitudes can be low, the strength of the sun can be terrifically high, so keep re-applying the factor 30 sun cream. If the forecasts look good then a lightweight waterproof jacket will often suffice as a top layer, however, be prepared for all sorts of variations in the weather - blizzards, rain, wind, thunderstorms, high temperatures, low temperatures etc. As for the snow itself, conditions normally start off icy from the low overnight temperatures, but from late morning to midday you can often get a couple of hours of excellent spring snow as the temperature rises. However, by mid afternoon the temperature has often risen too much and the snow is too wet to ski on. For this reason many lifts open early and close early, often before 2 or 3 o'clock. It's worth noting that there is always the chance of a fresh fall of snow at these altitudes, even in the height of summer.

Finally, with the glaciers retreating faster than my hairline, the best advice is to enjoy these icy delights sooner rather than later. Unless things change dramatically they wont be around for ever...

Some of the most northerly reaches of Europe retain snow well into the summer. The problem is that much of the land is unsuitable for downhill skiing. However, there are some resorts hidden away up there - the best known of which is probably Riksgransen in northern Sweden. This has become an end-of-season Mecca in recent years as those dedicated to following the snow in Europe migrate from the alpine resorts at the end of it's traditional ski season in late spring/early summer and then head up there. Riksgransen has a ski season that usually extends well into July - and by then the latitude allows you to ski under the midnight sun.

Iceland also has the latitude and the mountains to allow for summer skiing, it's main problem is that being surrounded by the relatively warm Atlantic it's weather can be very hit and miss. Cold one minute, mild the next, often very wet... And windy !

By the way, it's worth noting that there are a few other northern hemisphere resorts that offer skiing well into summer without the need of a glacier but you will have to get yourself over the Atlantic to enjoy them - Banff in Canada, Oregon's Timberline on Mount Hood and Mammoth in California have such good snow records that the lifts are often still running in the early summer months.

We've got a full section on indoor skiing in the UK.

If you want more traditional 'winter' skiing with the possibility of some good powder and a higher range of options then you'll have to head south over the equator and down to New Zealand or South America for their winter season. Chile and Argentina in South America both have well known resorts such as Portillo, Valle Nevado and Las Lenas. New Zealand has a number of resorts, so too does Australia, although their weather can be a bit more hit and miss.

Here's our guide to which are the best countries to head for if you fancy some summer skiing, with full details of what's on offer and what the latest conditions are like.