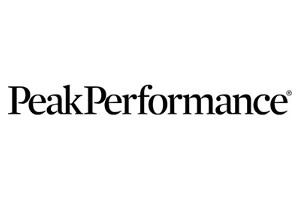 Its ski-wear and active-wear has a fantastic reputation on the slopes and in the mountains, not just for the way it looks but for its functionality and the way its gear performs in all weathers and conditions. Peak Perfomance's casual-wear also has a growing reputation, especially on the streets of Scandanavia and northern Europe, with an equally stylish look.

Peak Performance started manufacturing ski jackets in the Swedish ski resort of Are back in the mid 80's when two of the country's top ex-downhill skiers, Stefan Engstrom and Peter Blom, formed the company.

It has since grown into one of Scandanavia's biggest outdoor clothing firms, and one of the most stylish ski clothing brands in the world. It's also been making a name for itself in the golfing world, with its bright, tailored products becoming as popular in and around the greens and fairways as they are on the pistes.

Peak Performance is really stylish Scandanavian gear, one of our favourites for the look and appearance of it - a nice clean, sharp modern look. Over the last few years the company has started producing lots of stylish casual wear as well, and has a growing reputation for style in other sports such as on the golf course.

Peak Performance gear may be some of the most stylish around but it's also extremely functional. Just from looking at their GORE-TEX jackets or pants you can see it's high quality gear. As with most of the brands from the Scandanavian countries, you have to remember that one of the main reasons why their products have such a good reputation, is because these brands have been adopted in their homelands where the weather is pretty extreme and the outerwear needs to do its job !

Peak Performance gear is really stylish, top-notch stuff, so don't expect to get it for peanuts - you can expect to pay up to £500 for one of Peak Performance's GORE-TEX ski jackets, and around half that for non-GORE-TEX. But if you can afford it, buy it... you won't be disappointed.

Peak Performance clothing is available at the following Ski and Snow-sports Shops: