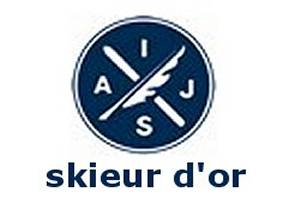 The Skieur d'Or is an annual award given out in October before the start of each new ski race season.

Votes are cast by members of the International Association of Ski Journalists (the AIJS) at the organisation's General Assembly and are based on the performances for the previous winter season.

There's only one award so members can vote for either male or female skiers.

The award has been presented since 1963 and is also known as the Serge Lang Trophy after the founder of the FIS World Cup and former president of the AIJS - Serge Lang.

One of the main tasks of the AIJS is to support ski journalists with regard to the FIS, national ski associations, and ski-race organisers such as the group of classic ski world cup venues known as Club 5. There are currently more than 100 members of the AIJS and ski journalists are welcome to apply to join its ranks.

For the third time in the last five years, the voting panel of journalists decided to award the Skieur d'Or to Austrian skier Marcel Hirscher. The 27 year old Austrian had won both the Overall title and the Giant Slalom title in the 2015-16 season, although Henrik Kristoffersen's fantastic victory in the men's Slalom, and Lara Gut becoming the first Swiss woman to clinch the overall World Cup title since Vreni Schneider in 1995, had seen both skiers challenge Hirscher in the voting.

The award was made at the annual presentation on the 20th October 2016, before the opening race weekend of the World Cup 2016-17 season at Solden, Austria.

For only the third time in it's history, the Skieur d'Or Award was jointly presented to two skiers, as the voting panel of journalists were unable to separate the merits of Anna Fenninger and Marcel Hirscher's achievements from the previous season. The 26 year old Austrians, both previous winners of the award (also known as the Serge Lang Trophy), had both won the Overall titles in the 2014-15 season, whilst Hirscher had also won the Slalom and Giant Slalom titles.

The award was made at the annual presentation on the 22nd October 2015, before the opening race weekend of the World Cup 2015-16 season at Solden, Austria. Unfortunately, only Hirscher was able to claim the trophy in person, as Fenninger was in hospital undergoing knee surgery following an accident in training on the Solden glacier.

Anna Fenninger, the 25 year old Austrian, has claimed the 2014 Skieur d'Or Award (also known as the Serge Lang Trophy) at the annual presentation before the opening race of the World Cup season at Solden.

Fenninger, from Hallein in the Austrian state of Salzburg, had her best-ever season in 2013-14, claiming the gold medal in the Super-G at Rosa Khutor in the 2014 Sochi Winter Olympics, whilst in the season-long FIS World Cup she claimed the coveted women's Overall title having finished 2nd in both the downhill and super-g. Away from the sport she has been a big campaigner for the Cheetah Conservation Fund (CCF), raising awareness of how close to being extinct the animal now is Anna's race helmet even has a cheetah design on it, to reflect her support for the CCF.

Tina Maze, the 30 year old Slovenian, has claimed the 2013 Skieur d'Or Award (also known as the Serge Lang Trophy) at the annual presentation before the opening race of the World Cup season at Solden.

Maze, from Slovenj Gradec in northern Slovenia, had a record-breaking 2012-13 season, claiming not only the coveted Overall title, but also the Giant Slalom and Super-G titles and incredibly finishing as runner-up in the downhill and slalom competitions. Not only this but she also broke the record for the number of podiums in a single season (24) and the number of top five finishes (31) and the highest winning margin (1313 points). Maze also became the first woman to stay at the top of the overall ranking table for the entire season.

Marcel Hirscher, the charismatic 23 year old Austrian, has claimed the 2012 Skieur d'Or Award (also known as the Serge Lang Trophy) at the annual presentation before the opening race of the World Cup season at Solden.

Hirscher, from Annaberg-Lungotz in Salzburg, had a fantastic 2011-12 season, claiming the coveted Overall title, holding off the challenge of another rising star, the Swiss racer Beat Feuz, by a margin of just 25 points. Hirscher also claimed the Giant Slalom title and was third in the Slalom standings.

Many thought fellow Austrian Klaus Kroell was in with a shout of the award following his heroics last season in claiming the downhill title, but his nearest rivals for the award were actually Didier Cuche (it was the Swiss star's final season), Cuche's young compatriot Beat Feuz, and 2009 winner (and perennial Skieur d'Or nominee!) Lindsey Vonn.

10 years after his sister Janica Kostelic was given the award following her victories in the slalom, combined and overall competitions, elder brother Ivica Kostelic was honoured with the same award in 2011. Kostelic had a fantastic 2010-11 season, including an inspired January that saw him win 7 races during the month, a record that no other skier had previously achieved. Kostelic ended the season by winning both the slalom and overall titles, and was seen as reward for the injuries he'd had to fightback from throughout his career. Kostelic was given nearly a third of the votes and got the nod over rivals Didier Cuche, Maria Hoefl-Riesch and Christof Innerhofer.

Carlo Janka became the first Swiss male skier for 20 years to receive the honour since Pirmin Zurbriggen won it back in 1990 as he received around half of the votes and beat off strong competition from fellow Swiss skier Didier Cuche, Norwegian Aksel Lund Svindal and the American pair Lindsey Vonn and Bode Miller. Aged only 23 Janka had claimed the FIS World Cup Overall title for the 2009-10 season and also took Olympic gold in the Giant Slalom at Whistler. He was given the award at Solden in October before the first race of the season.

American skier Lindsey Vonn became the first female skier to win the award since Croatian Janica Kostelic back in 2001. There were some big names in the mix for the award, with previous winners Hermann Maier and Aksel Lund Svindal receiving plenty of votes, along with the ever-popular Didier Cuche and young Swiss stars Carlo Janka and Daniel Albrecht. However, Vonn collected enough votes to receive the prestigious award - well deserved following her gold medals in Downhill and Super-G at the Val d'Isere World Championships along with winning the season-long FIS World Cup Downhill, Super-G and Overall competitions.