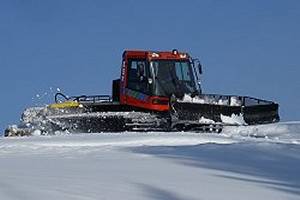 Are you new to the piste and wondering what the hell everyone is on about when they're talking about snow ploughs, parallel and carving ?

Do you stand there perplexed with your mouth open when fellow skiers are talking about corn snow, mashed potato and huge overnight dumps ?

Yes ? Then this is the place for you, with all the ski and snowboard terms explained in English. Simple English...

...And if you have any other good ones then please get in touch. The more unusual, the better...

Clothing, particularly outerwear. The phrase is commonly used in the skiing industry, especially over in the States. See also gear.

In its traditional form it means going straight from the slope to a bar for a drink, whilst still decked out in all your ski gear. However, in recent years it's almost become a common general term to describe the level of nightlife at a ski resort. In our eyes though, traditional is best, and proper après-ski means stopping at a bar on the slopes, witnessing plenty of large stein's of beer being chinked, and hearing plenty of Euro-pop being sung loudly whilst ski-boots are still firmly in place. And although après ski might be a French term, simply translating as after skiing, it's actually the Austrians who are now the undoubted 'après ski kings of Europe'. Indeed, many of the Austrian resorts have had almost legendary status bestowed upon them for the quality and craziness of their après-ski scene, and you'll often find that the top drinking dens have equally fantastic names, along the lines of Hotel Krazy Bar, or Hotel Club Bonkers.

The area outside of an official ski-area boundary, away from the marked pistes.

The name's Billy... 'Billy Bullsh!t'. This is the name given to a fellow skier who you meet in the bar and then brags away about how many black runs he's covered during the day. Later on in the evening, when he nips off to the toilet, his unsuspecting wife lets slip that they've actually spent most of the day on blue runs. See also Breakfast Billy.

The name's Billy... 'Billy Bullsh!t'. This is the name given to a fellow skier who you meet at the hotel/chalet's breakfast buffet table and then proceeds to tell you how many black runs he's thinking of skiing that day, only for you to spot him later in the afternoon snow-ploughing down a blue. See also Bar Billy.

An advanced ski turn technique, that allows you to turn without any major loss of speed.

Not the material that your dads flares were made of in the 1970's, but the appearance of the pistes after they've been groomed by the piste-bashers into lovely parallel lines. A great feeling to be the first to ski over them !

The Crazy Canucks was the nickname given to group of Canadian ski racers who burst onto the world scene in the 1970's and 80's and became famous for their fast, risky and often reckless style of skiing. The members of the group were Dave Irwin, Dave Murray, Steve Podborski and Ken Read. Their risky style produced not only plenty of dramatic falls but also plenty of success - the group earning more than 100 top 10 World Cup finishes between 1978 and 1984. Journalist Serge Lange lays claim to coining the phrase after watching Dave Irwin fall in a race, and the nickname stuck with the rest of the Canadian skiers after that. The Crazy Canucks are amongst the best loved sportsmen in Canada and a film based on them was made in 2004.

Term used to describe a leisurely ski down a simple piste, seemingly with hardly any effort involved, no tricky turns etc, and basically not a care in the world. The term is often used to describe certain pistes, as in "this area of the mountain has plenty of long cruisy blues".

Note: the ski term is definitely not to be confused with the dodgy urban "cruising" phrase, such as in the song "Cruisin' the streets", sung by 80's disco band Boys Town Gang. Oh no, it's definitely not to be confused with that. We don't want people to think it's describing some sort of seedy, alpine, red-light area on the slopes when they hear that someone's been "Cruisin' the pistes all afternoon".

No, we're not talking about what you might need after a bumper plate of rösti and two large glasses of wheat beer, but the term given to a big fall of snow. As in a fresh dump, or a decent-sized dump.

See also a good dump, a huge dump and a fresh dump

The most direct route down a piste or slope.

The Federation Internationale de Ski (in English, the International Ski Federation) is the world's governing body for skiing and ski-related winter sports and is based in Oberhofen-am-Thunersee in Switzerland.

A discipline of snowboarding where the boarder uses man-made terrain and features such as half-pipes, rails and jumps to perform aerial tricks.

The term given to a form of snowboarding where there are no restrictions or rules but the focus is on dealing with whatever natural terrain the mountain throws at you. Don't get this confused with freestyle snowboarding which is more about man-made terrain such as half-pipes, rails and jumps.

General term covering all the clothing, equipment, accessories etc that you need to hit the slopes. See also apparel.

Sticky, sloppy snow that you get in warmer weather. Often ungroomed and hard to ski on.

Moguls are mounds of snow that get formed on a ski slope when skiers push the snow into piles and bumps as the skiers execute series of turns on their way down the slope. The bumps get larger as more skiers then follow the same path down the slope, pushing yet more snow into the mounds and creating deeper grooves and troughs around them. The term mogul is thought to come from the German word mugl, meaning small hillock.

Name given to an area of a slope that has become full of a series of Moguls.

The next stage in skiing after you've mastered the snow plough. As the name suggests, the idea is for the skis to point in the same direction.

Large caterpillar-tracked snow vehicle that grooms the snow on the slopes into condition so that we can all ski and snowboard on them.

Getting the snow on the pistes into a nice fresh condition, such as the corduroy effect. Usually done by a piste-basher.

Alpine scumbags who like to spend the day trying to steal skis and equipment, usually from outside bars and mountain restaurants. It's lead to an increase in people trying to lock their skis to the storage units, but the oldest trick in the book is to mix your skis up if you're in a group, hoping that the piste thief will avoid it in favour of easier targets.

Being stood on the slopes hearing cries of "Pizza! Pizza!" you could be excused for wondering what on earth is going on. Whilst it is possible that a hungry thief has made off from a mountain restaurant without paying for his midday snack, it's more than likely to be some poor ski instructor screaming instructions at a group of 5 year old kids, as it's the term sometimes used on youngsters to describe the snow plough.

Affectionate term given to a skier who has the bottle to tackle a tricky red or black but doesn't have the technique to actually stop at the bottom of the slope, so is thereby last seen hurtling over a snowy bank or crumpled up on in a heap by the ski lift. These skiers are named after Ronnie Rosenthal, footballer and culprit of the legendary worse miss in football, ever. ...he couldn't finish things off either.

To ski straight down the fall-line of the slope, skis parallel, therefore achieving high speeds.

Someone who spends the entire ski season in a mountain resort, usually getting work in a chalet, in a bar, or as an instructor. Hard work, but worth it for all those days out on the white stuff.

Someone who lives, sleeps and breathes skiing or snowboarding, spending the entire winter on the slopes, usually finding a way to pay for their lift pass by getting a part-time job in the resort.

Usually the first thing a skier is taught on the slopes, the snow-plough is a basic technique that allows you to slow down or turn. Basically, the front point of the skis are brought together and the ends are pushed wide apart. See also Pizza.

The description of snow conditions during the warmer Spring months. The freeze-thaw process from night to day results in softer snow around noon. By late afternoon, if the sun's been on it all day, the snow can be really wet. It then freezes overnight and the process starts again. Also known as Corn Snow.

A style of skiing created in Norway back in the 1800's. You'll know it if you ever see any skier doing it as the inside ski is pulled along with a bent knee and a raised heel. Therefore the equipment is totally different as only the toe is connected to the ski (as in cross-country skiing).

This usually means off-piste alpine skiing through woods. Tree Skiing is dangerous because, as the phrase implies, there's the added danger of trees to avoid, as well as hidden objects such as fallen trees, branches, stumps etc. Also known as Glade Skiing.

Pretty much does what it says on the tin. It's the same as you get when there's a 'normal' thunderstorm, but instead of rain you get snow.

A common disease that can effect skiers, snowboarders or basically anyone who has spent time in the mountains. It's not just confined to the winter months of December to March but can strike really badly during the Autumn as the afflicted desperately search the live cameras all over the internet for signs of fresh dumps of snow. You don't just get addicted to web cameras of places you've recently visited either, as you end up trawling through every ski resort you've ever been to or basically every resort you've ever seen in a ski brochure, advert or an episode of Ski Sunday.

The White Circus is the nickname that's been given to the FIS World Cup tour as its skiers and accompanying coaches, technicians, media and fans sweep around the world from ski resort to ski resort as the race calendar gets ticked off.

You'll often read this term when reading about winter sports clothing - it's the name given to the way the material transfers moisture away from the skin and through the clothing.

Winding Down the Windows ski

Term often used by ski-racing commentators to describe a skier's mid-air arm movements after hitting a big jump as they desperately try to retain their balance by flinging their arms round and round, just like ..err.. winding down a window!