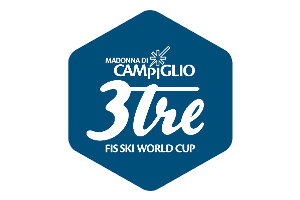 The 3-Tre is one of Alpine skiing's classic races, and one of the most historic events in Italian winter-sports.

The name 3-Tre is pronounced "Tre-Tre", Italian for "Three-Three", and comes from the fact that when the idea was originally formed it was made up of three separate races held at three different locations in Trentino.

The race takes place on a slope called Canalone Miramonti which overlooks Madonna di Campiglio's resort centre, whilst there's another slope above it called 3-Tre, and both slopes can be skied by recreational skiers when the race isn't taking place.

Unlike other classic races such as the Hahenkamm and the Lauberhorn, which have always maintained their annual place in the World Cup season, the 3-Tre was dropped from the calendar for a number of years in the mid 2000's. However, the FIS has seen sense and it's great to see this fantastic event back as a regular race on the circuit, with it's traditional pre-Christmas slot that sees the resort of Madonna di Campiglio hosting a night race for the world's finest slalom skiers.

The original 3-Tre races date right back to 1950, with the organisers having the idea of hosting three races at three different slopes in the Trentino area of Italy. The original ski slopes that were used in the 3-Tre were at Fai della Paganella, Serrada di Folgaria and Monte Bondone. In subsequent years 3-Tre races were also held in San Martino di Castrozza, Canazei and Marmolada, until in 1957 the races were held for the first time in Madonna di Campiglio.

The name 3-Tre is pronounced in Italian as "Tre-Tre", meaning "Three-Three", and comes simply from the idea of having three races in three Trentino resorts.

The original 3-Tre races were usually made up of a downhill, a giant slalom and a slalom, and were held between January and March and were part of the FIS-IA vents - the highest class of races at the time. When the FIS created the annual World Cup event in 1967 the 3-Tre slalom at Madonna di Campiglio was one of the original events.

Since the 1985-86 season the 3-Tre event has been changed so it only consists of a slalom, held on the slope of the Canalone Miramonti in Madonna di Campiglio. 3-Tre is still used as the name, even though it no longer means what it used to.

Madonna di Campiglio was one of the 15 original resorts to host a World Cup race in the competition's first season back in 1967. Since then the 3-Tre Slalom has been a regular fixture on the World Cup calendar apart from a seven year gap between 2005 and 2012 when it dropped down to the European Cup.

Anyway, the list of winners of the 3-Tre Slalom since the event was first run at night in 1957 are as follows: