Guide to Skiing During School Holidays 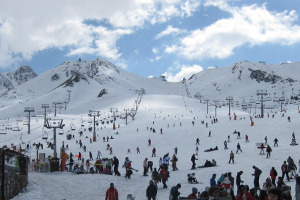 Skiing and snowboarding holidays are expensive enough, but for those skiers and snowboarders with young families in tow or teenagers travelling with them (snow-sport holidays remain one of the few trips away that teenagers tend not to moan about!), the annual trip into the mountains can be a costly experience. A common quandary for such families was always whether or not to dramatically reduce the cost of the ski holiday by booking a deal outside of the school holiday times, but when the law changed in September 2013 and fines were introduced by local government councils for children missing school, this became less of an option for many holidaymakers.

So what are the advantages and disadvantages to booking a ski or snowboard holiday during each of the UK school holidays ?

Well, if you ignore summer-time glacier skiing or a long-haul trip to the southern hemisphere, then there are basically four school holiday periods in which skiing or snowboarding is available:

The problem with three of those periods (October, Christmas and Easter) is the reliability of the conditions - and this is one of the biggest dilemmas facing families who have to book during holiday times. Winter-sport holidays aren't like summer holidays where you just go along and if the weather isn't great you can do something else for entertainment, like go to a zoo. When you book to go skiing or snowboarding, you're paying your hard-earned money to specifically do just that - ski or snowboard. So knowing that their is going to be snow there to slide on is a big factor in when many people book.

One of things that we've discovered over the years is that, probably with the exception of Christmas and New Year, local authorities in the UK do tend to have differing school holiday periods every now and again, and that can make a big difference to the price of booking a holiday. So if for example, the majority of the country is having the same half-term week in February, but Yorkshire and Hampshire have got the week before or the week after, then if you're in one those counties you can expect to pick up a better price, as the holiday companies will often price according to which school holiday weeks the majority of the UK student population will be taking. So it's always worth having a look as soon as you get the term dates, just in case you're lucky enough to fall under an area that;s taking a different holiday to the majority of the rest of the country.

Ok, so it's not ideal and it certainly won't be everyone's cup of tea, but if you have to go skiing in the school holidays and the amount of money you have available is a factor then a trip during the Autumn half-term (it usually falls during one of the last few weeks in October) is worth considering. There is one big disadvantage that leads to lots of problems - the amount of snow, or rather the lack of it, in European resorts at this time of the year. The only resorts that are going to be open are the high ones with access to glaciers, and possibly a handful of Scandanavian resorts that have had enough early-season snow to allow the lifts to start running. So with the majority of resorts not open at this stage you can forget about flicking through the glossy ski brochures and booking something from them, you either need to find a specialist ski company or do it yourself, booking the accommodation separately and getting yourself there, both of which can be quite well priced because the demand's not as great at this time of the year. However, because the conditions are not guaranteed at this time of the year, you run the risk that if you book it too early you're not 100% sure if the conditions will be good enough, but vice-versa not everyone can leave it late to book a holiday. Given the complications of booking a ski holiday so early in the season, and at such high-altitudes, this sort of holiday is not going to suit families with very young skiers in tow, however, it may suit adventurous families who's kids are now in their teens and who have a bit of experience on the slopes. Either way, it is another option for those wanting either an early-season fix of snow, or who are looking for a much cheaper alternative to February, and who have the time and inclination to work out where to stay and how to get there.
Anyway, a good place to start is our guide to those resorts with glacier skiing.

The Christmas and New Year break is usually the most expensive ski or snowboarding school holiday option. For those who can afford it, a Christmas trip into the mountains can be a fantastic, magical experience, especially for young kids. However, whilst the thought of a white Christmas in a beautiful Alpine resort sounds great, the reality is that if you pick the wrong resort or get unlucky with some unseasonally warm weather, then a lack of early season snow can be a major worry.

Skiing and Snowboarding during February half term will definitely have the most reliable conditions but has the disadvantage that the ski slopes can be packed, especially if it clashes with the school half-term in the country you're in, or with another exporter of skiing holidaymakers such as Holland !

The first thing to do is to check that you're kids half-term school holidays are in-line with the majority of the rest of the country. If you fall lucky and you're in one of the local authorities that are a week either side of the main holiday week, then the cost of booking the holiday itself through a ski holiday operator should be considerably lower. The chances are that you'll be stuck with the rest of us though, so to reduce the cost consider booking the flights and hotels separately. If you've got the time and the inclination, and you know which resort you want to head for, then emailing individual hotels and chalets for prices can often reap big rewards. If you choose a resort that's not really popular with UK skiers then the likelihood is that the hotels won't be hiking their prices up for one specific week, and you can often get it at the same rate as per the rest of that period. When it comes to flights, the cost is often down to demand, and if you can get in their early then you can get some decent prices. Again, if you're heading out to areas that are popular with British skiers then the demand for flights will be greater and so it follows that the costs will be higher.

Heading for the slopes at Easter for a family ski holiday is generally the cheapest of the options, but it can be another gamble at many resorts because of the late-season conditions. However, the oddity of Easter ski holidays is down to the oddity of Easter-time itself, because this is one holiday in which it can fall between a real range of dates from year to year. So in one year Easter could fall in March and the slope conditions at many resorts could still be fantastic, whilst in another year Easter could be falling in April when things have warmed up and the slopes aren't that favourable, and the snow cover may be more limited, particularly in lower-level resorts. Vice-versa, if it's been a good season then you stand a good chance of great spring-snow conditions, bathed in glorious sunshine for a week ! If you're going to book Easter well in advance then it's a good idea to book a snow-sure resort, but if you book late on then you can pick a resort that is showing good conditions.