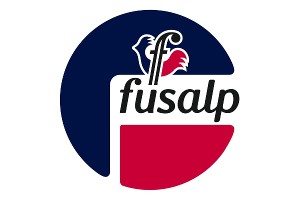 Fusalp is one of the classic ski-wear heritage brands, and it's great to see it back on the comeback trail after years out of the limelight compared to the heady days of the 1960's and 1970's when it was at the fore-front of the ski-wear revolution, with it's iconic designs and apres-wear making it a popular brand both on and off the slopes.

Fusalp was formed back in 1952 by a couple of French tailors from Annecy, Ribolat Georges and René Veyrat. Fusalp became one of first companies to embrace ready-to-wear, 'off the peg' ski clothing and became an extremely popular sight on the slopes throughout the 1960's and 1970's. It's popularity wasn't limited to the recreational slopes of the Alps either, as Fusalp ski-suits were adopted by many ski-racers, and the French Winter Olympic teams would often be seen wearing Fusalp at games in the 1960's and 1970's.

The brand slipped into troubles in the 1980s and disappeared from many of Europe's ski boutiques. However in 2014, two members of the famous Lacoste family, Sophie Lacoste-Dournel and Philippe Lacoste, purchased a majority stake in the company, with the idea of reigniting the Fusalp brand as a high-end, luxury ski-wear label.

The new management did a great job in marketing the Fusalkp brand, getting serious players from the ski-racing world on board, such as the downhill gold medal winner from the 2006 Turin Winter Olympics, Antoine Dénériaz, as well as pushing the fashion element of the label in the style-circles of Paris.

One of the great things that the new owners have done is to totally embrace the heritage of one of skiing's great historic brands, keeping Fusalp based in Annecy and retaining the classic style of many of its products.

When it comes to ski-wear style, Fusalp is right up there with other brands that have been iconic on the slopes for years, such as Bogner and Colmar.

Fusalp was always at the fore-front of ski-wear design in the sport's boom era of the 1960's and 1970's, with Fusalp heavily involved in the ski wear revolution - using highly technical materials in streamlined, close-fitting designs that looked effortlessly stylish. The classic ski pants "Le Fuseau" became one of Fusalp's iconic products, with their stirrups and tapered fit, and they proved a hit on the slopes throughout the Alps.

Fusalp's new range of ski-wear is being marketed to the luxury end of the market, similar in style to the Moncler brand that has done well amongst the Alpine high-rollers in recent years. There's a very retro feel to the styling of many of it's jackets and pants, with the iconic Fusalp badge and streamlined fit also giving it a ski-racing feel.

Fusalp was also one of the few companies back in the 1960's and 1970's to design stylish après ski-wear alongside its on-piste products, with its après ski-sweaters almost as famous as its Fuseau pants through the 1970's. It's great to see that during the brand's reboot it's still focusing heavily on clothing that can be worn off the slopes as well as on it, with it's après clothing drawing inspiration from its slope-wear.

As well as being stylish, Fusalp has always had a great reputation technically. Fusalp was worn by lots of ski-racers back in its 1960's and 1970's heyday, and the French winter Olympic teams would often be decked out in Fusalp gear and ski-suits back in these eras. So, as the saying goes, if it was good enough for Jean- Claude Killy...

Fusalp returned to the Winter Olympics at Sochi in 2014, sponsoring the French Bobsleigh team.

The question is, how much do you want to pay ? There is a big range in prices, especially in Fusalp's women's range. For instance, Fusalp's basic ski-jackets start around the £350 mark, but you could pay up to £1200 for its high-end luxury jackets, such as the Fusalp Morzine ski jacket, and nearly £1500 if you wanted a luxury all-in-one Fusalp ski suit, such as the Stranda model.

Fusalp's men's jackets don't go up to quite the same expense as their female counterparts, starting at a similar level around the £350 mark, Fusalp's top-end men's ski jackets are £500 to £700.

Fusalp clothing is available at the following Ski and Snow-sports Shops: