When it comes to glitz, glamour and expensive chalets, the Swiss resort of Gstaad ranks right up there with some of the other resorts popular with Europe's wealthy skiers.

So whilst other resorts in the surrounding area may have normal jewellers, Gstaad has the likes of Chopard and Cartier down it's main street! However, whilst Gstaad may have the jewellers, shops and fine accommodation to match the likes of St Moritz and Klosters, it's range of skiing on the slopes immediately above the town can't quite compete with some of these other high-class resorts.

The live images below of Gstaad : Saanenmoser (1955m) are provided courtesy of Feratel Media Technologies AG


The live images below of Gstaad : Schonried (1833m) are provided courtesy of Feratel Media Technologies AG

A list of webcams for Gstaad and the surrounding area.

No webcams are currently available for Gstaad.

Any Summer Skiing at Gstaad ?

You may read articles implying that resorts in the Alpes Vaudoises (such as Gstaad) have a summer skiing option up at the nearby glacier above Les Diablerets. However, whilst that used to be the case some years ago, the dramatic reduction over recent years in the size of the glacier at Les Diablerets means that skiing is available both early and late in the skiing season , but is no longer available throughout the main summer months.

Getting to the Slopes at Gstaad

The Skiing at Gstaad

Gstaad is part of the Alpes Vaudoises Ski Region:

Information on the Swiss ski area Alpes Vaudoises, including links to the surrounding resorts, webcams, slope information and lift details.

Whilst the skiing at Gstaad may not have the range of some of its glitzy rivals (such as St Moritz), its skiing is actually fantastic if you're an early intermediate and heading there in mid-winter when the relatively low top altitudes are not a problem.

We'll start from the highest lift-served point in the Les Chaux area, which is the 2020m Croix des Chaux (accessed via a chairlift from Sodoleuvre down in the valley below Les Chaux). There's something for everyone wanting to ski down from Croix des Chaux, with a blue piste, a red piste and a black piste all making there way down to the main set of mountain facilities at Les Chaux. Skiers can continue down each of these pistes towards the Frience area, which incidentally has a good toboggan run. There's a drag lift at the bottom of these slopes to take you back up to Les Chaux. Alternatively, rather than heading down towards Frience from Les Chaux, you can ski down in the other direction to Sodoleuvre, and yet again there options for all skiing abilities with a blue run, a red and a black all winding down (from the bottom of these slopes you can get a chairlift right back up to Croix des Chaux or continue further down the slope to Rasse and get a chairlift up to the Chaux Ronde area). Those skiers coming down the blue piste from Les Chaux to Sodoleuvre can make a switch halfway down at Combe du Scex and make there way right down to Gryon on a long blue piste. Skiers can then return back up to the Les Chaux area on the gondola from Barboleuse on the edge of Gryon village.

A list of piste-maps for Gstaad and the surrounding ski areas.

Gstaad The Resort Itself

Gstaad's resort centre is basically a single pedestrianised street. Known simply as the Promenade, it's very attractively lined with beautiful picture-postcard, chalet-style buildings, many occupied by fancy jewellers, watch shops, expensive clothing boutiques and delightful cafés. At one end of the Promenade is a large open area, home to an ice-rink during the winter months and the Swiss Open tennis tournament during the summer.

The world-famous Gstaad Palace Hotel, one of the resort's finest, holds an auction every Decemeber for Ferrari and Maserati sports cars, attended by famous (and rich) bidders from around the world.

Gstaad - Any Chance of Early Snow ?

Gstaad vies with St Moritz, Verbier and Klosters for the tag of Switzerland's most swanky ski resort. Skiing can play second fiddle to looking good and making sure you have a reservation at The Eagle Ski Club (a private restaurant serving the world's most expensive dinner!).

Annual Events in this and neighbouring resorts... 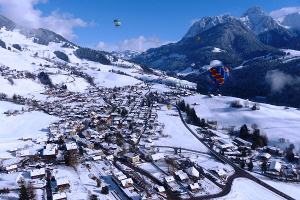 When it comes to ballooning, the Swiss resort of Chateau-d'Oex is the Alpine capital, and this is the festival to celebrate it. The 2016 festival will be the 38th in the history of this renowned international event, and will feature about 100 balloons, including 10 special shaped ones, from over 20 different countries. The highlight for us though has to be the fantastically named event - "the David Niven Long Distance Hare and Hounds Competition" !

As the festival normally runs in the last week of January it's possible to combine a visit with a skiing holiday in the area - Chateau-d'Oex is situated in the Pays-d'Enhaut region (between Lausanne and Interlaken) and there are a number of other ski resorts close by, including Gstaad for the millionaires amongst you. 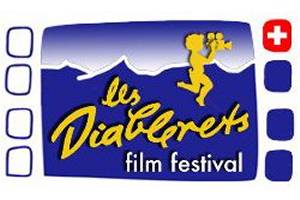 The 2016 Les Diablerets Film Festival will be the 47th running of one of Europe's largest events dedicated to films centred around the mountains. Centre piece of the festival is a giant screen showcasing the latest action from some of the world's top outdoor film directors, including some free-riding features. There also climbing walls and exhibition stands to visit.

If you want some further information on Gstaad, then you might find these links to other sites useful...